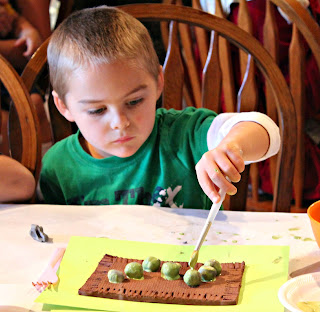 Yesterday Asher and I set off to do something different. Asher had his last swimming lesson for the session on Tuesday, and he decided it did not want to continue them for now. While we are trying to find a weekly activity, we are giving other things a try.

First up, art. Pottery Tots is a monthly class offered at Its Yours Pottery in Omaha near 132nd and Center Street (so not close to us at all). We used to go quite often when Addison and Asher were little. I don't believe Asher and I went even once last year! What a different a couple of years makes, too.

The class was based on 'HUNGRY CATERPILLAR' by ERIC CARLE followed by making clay caterpillars. The class is designed for preschoolers to hear a story and be artistic. It was fun to see Asher be creative, rolling the clay, painting, and being independent. He always had his eyes on me as to where I was in the room, though. He was one of two boys (and the boys were probably the only 4 year olds in the class). I felt OLD. All the moms were like 20 with little babies and 2 and 3 year old little girls. Asher had fun, but he did not want to go back when I asked. I have to admit, I was relieved. I felt out of place there. Maybe if I had gone with friends like we had done in the past it would have been better...? There are just some things perhaps both Asher and I have outgrown, and a tot class is definitely one of them.

That sounds like fun! Fremont needs things like that to do. I love his picture, he is so focused!