How funny, spotted our house and THE AUSTIN CRIB blog on Pinterest! How funny is that?!
Here is the PIN with this image. Funny to see someone Pin YOUR home.

Okay, so we tried out Lauren's Latest Cheese Bread. It is WONDERFUL. We found we used a bit too much cheese and perhaps a bit too little butter and garlic mixture, yet is was still a hit. Again. 4 out of 5 of us ate it (Of course, Alivia would not try it).

Here is the result:

Last night Grandma Kathy treated Chris and I to a date night. Chris had a plan, he wanted to go to Zio's Pizza. Mmm! I had not been there since collage.

It is funny, since moving to Papillion, it seems like we live in another world. Zios in Omaha seems so far away! Dinner was delicious. It was fun to just sit and actually have a one on one conversation over some nice hot pizza and cold sodas. It was so good (did I already say that?!).

Next, we wanted to go to Costco. Chris had not been there and I just wanted to get an idea of what he wanted. We just walked around checking things out. Chris was looking at something and said I was going to walk down the aisle quick to look for something. When I turned around, Chris was gone. He had the cart and my purse and was just gone. I walked to the electronics where I was sure he would be...empty. I was really getting nervous thinking he had left me when I spotted him trucking it down the aisle. He thought it was funny as he was near by where I was looking at kids books. Ugh.

After our shopping excursion, it was time to head home.

It is so nice and important to get nights out to ourselves every once in a while. We are lucky to have Grandparents to help us by watching the kids, too.

A month ago, Chris and I received pedometers through a program at Chris' work. We have been wearing them daily, tracking our steps, as well as entering in our exercise on the website.

The results are in.

I have 14,251 average daily steps with 18,703 being the most steps in a day. The last 5 days I have had  over 17000 steps per day, but when I work I only get in 7,000 steps (which is amazing considering most of the time I am sleeping or sitting down charting). I try to run on the days I work, knowing that I sit at work and sleep at home.


I have been trying to sneak in a run a couple times a week, as well as go to Zumba (and the Zumba class I go to is high impact, vigorous, cardio. But, have I mentioned how fun it is?!). I also run up and down our steps several times during the day with laundry, kids, and just getting around our house. One day this week I did one hour of Insanity, went to the forest and walked, and then came home and ran (the weather was just too nice). I was tired at the end of that day.


Chris usually gets in 5,000-7,000 steps a day, usually with the one hour of insanity that we are doing right now. He is sitting at work, so it makes it harder for him. He is more active on weekends, however.

I have not done one of these in a while, an update on the view around our home. Gees, it is a messy one at the moment. Oh, and I can't forget to say LOUD! Come on, I thought there were 4 seasons, winter, spring, construction, and fall. Construction is in the summer...not all winter!!

Okay, I guess I missed that memo.

So...here is our view today. Much different than the empty space that surrounded our home 2 years ago.

The Forest in February 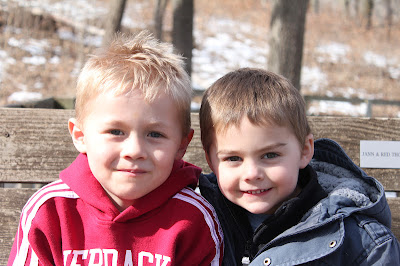 Yesterday's high topped out in the 50's! There is usually one day of the month that is a little nicer than the others so we can keep up with our monthly visits to the forest. Yesterday Asher actually asked me if we could go to the forest.

So, we invited his friend Cameron along to run off some of that extra little boy energy (and they had a lot of it!). We arrived shortly after noon to a quiet forest, at least it was quiet until we arrived. The boys and I walked (well, they ran, but I walked) the 1 mile boardwalk. They collected sticks to throw, watched for trains on the train tracks below, looked for wild animals and birds, and got some much needed fresh air. The forest is so peaceful.

After all the fun of the forest, we visited a park briefly before going home to wait for the girls.

It was a beautiful, fun afternoon. Both of the boys said they had fun. Forest trip: Success. Now, I just need to go back with just Asher so I can hear some of that silence. :) 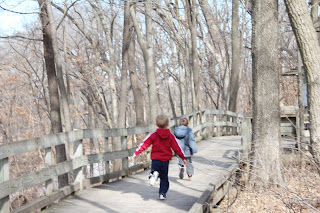 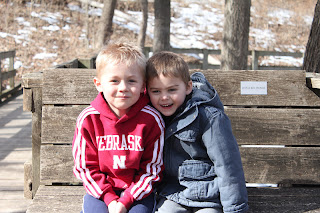 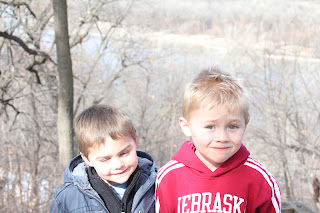 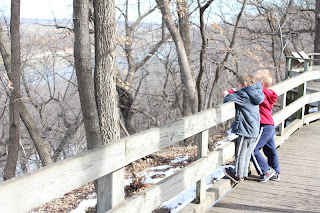 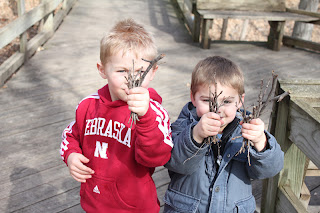 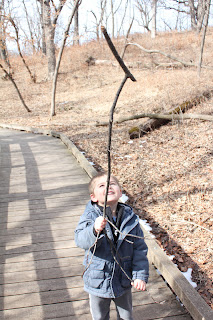 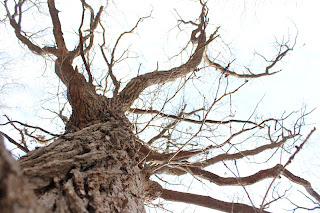 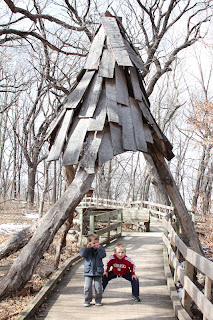 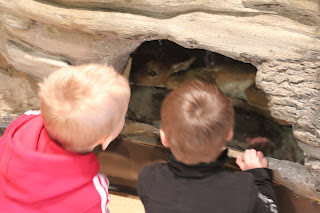 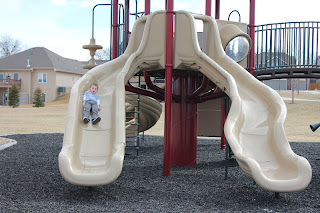 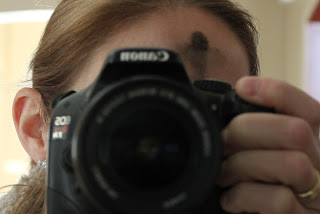 Ash Wednesday is the kick off, or sorts, to Lenten Season. Yesterday Asher and I attended the 8:15 Mass. As soon as we sat down, I realized that I had wanted to go to St. Vincent's (Our previous Parrish) for Mass.

Oh well, we were at Saint Columbkille now.

This is the first year since Asher was old enough to realize that he was willing to get the Ash marked on his head. He did not say a word about it. I found him to be listening through Mass, too, which is nice.

As the Scripture was being read,  I believe it was Matthew 6:6, they read about going into a room, shutting the door, to pray. Asher pipes up, not so quietly, and says, "What room?!" as he looks around the Church. It was kinda funny. This is after he asked in a previous Mass if we had to go to Church even after we died and went to Heaven. :)

This Lenten Season, we are trying to give up things and do things that will bring us closer to God.

You know, Chris and I are sort of doing the 365 project (really, the 366 project due to leap year) together in 2012. What a challenge that has turned out to be! Chris is too busy updating his resume and portfolio to take pictures! And I, well, I have no motivation.

So far, I have been taking most of the pictures. I have lost interest really. It is more of something I have to do every day. I now find it annoying. Last year it was fun. Now, it is getting old. But, I am plugging along. Chris is helping with the editing. So, it is still a team effort. This will definitely be my last year, if I complete it.

Here are some of my favorites...


Yesterday the kids had the day off of school for President's Day. We had a lot of fun things planned to make the most of it.

First, the kids wanted to get in that sleepover that I promised (and was supposed to be Thursday night, if they were not sick). Addison and Alivia both had friends. They ate dinner, played (all together well, which was nice), and watched a movie quietly (amazing!). Then it was time for bed.

Addison and her friend were asleep within minutes. So sweet as they cuddled together.

Alivia and Zoe...not so much. They were loud, laughing, texting me on my ipad (with Alivia's touch, something I was about to take away from her), etc. Finally, at 10:30, they went to sleep. Asher stayed downstairs, watching a movie and falling asleep, with Chris and I.

The sleepover (or should it be called awake over) went well. The morning was crazy. I got up early to get my insanity in before the kids got up. Addison and Kaitlyn were awake at 6:20! No way! Alivia and Zoe slept until 7:30 or so. Then it was time to get everyone dressed, teeth brushed, hair combed, breakfast and out the door by 8:30. I wanted to get to Zumba at 9 at the YMCA, then open swim at 10. I wanted to get there right at 10 for open swim since it was open house day at the Y and I figured it would be crazy.

The kids had fun in kids club, seeing their friend Katy and coloring with her, while I worked it out at Zumba. Let's just say an hour of Insanity followed by an hour of high impact Zumba is a major workout (but Zumba is just too much fun to skip).  We got into the pool right after 10. Initially, it was not too busy. Addison and Alivia played with Addi's friend Kate, who was swimming with her brother, Henry. Asher just splashed around, playing catch with me. Then Addison's friend Kaitlyn came with her Mommy and her little brother. Funny, Asher had to friends at the pool, Henry and Will, and really was more entertained playing alone in the pool. So funny.

At break time, the kids wanted to get out and go jump on the Y's bouncers that they had for the open house. We showered and set out to the bouncers. We then found out that they Y had to close the pool for a bit anyway (Poo found in the pool!! GROSS!! Did I say that was why I want a pool IN OUR YARD?! POO FREE ZONE!!).  By 11:30, the kids were tired and hungry, ready for our next adventure.

The kids had a picnic while I raced to the zoo to catch the 12:15 showing of Sharks. Funny, everyone else had that same idea. We were in line for tickets when at 12:05 they announced the Sharks showing was sold out. Ugh!! So, we set out to see some animals before coming back to see the 2:15 sold out Sharks in 3D IMAX. The kids were wiped (and so was I!). We took our time going through the desert dome, jungle, tigers, orangutans, gorillas and monkeys. The monkeys and tigers were in the middle of their naps, making all of us sleepy. They were so cute!

The Sharks movie was CRAZY! We waited in line until 2:13 for a 2:15 showing. We barely sat down and the movie started. Nothing like standing for 25 minutes with 3 tired kids. The movie itself was awesome. I love the underwater IMAX movies. It is so cute to see the kids try to reach out to the fish. But, they were all 3 asleep within minutes.

After the movie, we set for home. Soon, their friends Kate and Henry came to play. The boys and Addison helped me make donuts while Alivia and Kate played. This time, I threw come cocoa in with the chocolate chip donuts. They were delicious! They were a hit with all the kids except Alivia, who refused to try them ("I don't like donuts.") The boys challenged me with their endless energy before I started a movie for them so they would chill. I am always amazed where kids get all their energy?!

It was a fun filled day. At dinner, I asked the kids what they liked best.
Asher, "I liked Ycare with Katy, swimming, jumpy jumps, the zoo monkeys, the sharks movie, and playing airplanes with Henry." Addison liked her sleepover and the tigers at the zoo. Alivia said she agreed with Asher, except she liked playing with Kate.

Now, today is going to be a day of rest. I'm exhausted! 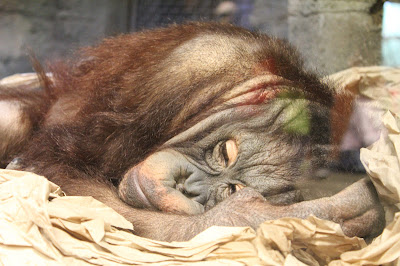 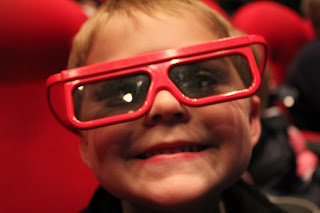 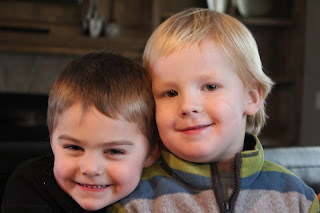