As the season winds down, I am finally getting to soccer.

This year, Alivia AND Asher went out for soccer AND Chris coached Alivia's team and assisted Asher's team. Practices were Monday and Friday for Alivia and Tuesday and Thursday for Asher. Games were Tuesdays, Saturdays and Sundays. CRAZINESS!! We could only have dinner at the table on Wednesdays and usually I worked on Wednesdays (so I have not had dinner with the family for WEEKS!).

Asher had a great season. He has really advanced in his game. He is actually aggressive and asking to play with a friend on a select team. We will see if he is that ready. He is a good striker and defender.

Alivia had not played soccer in years. She came a long ways this season considering their team was on the young and small end of things. And, she wants to return in the fall to play again. YEAH!

Asher completes his season on Saturday and Alivia finished this past Tuesday. As the school year comes to a close...I am just happy to get a hot meal for dinner!!

The Lincoln Half Marathon 2015 - My Third Half

Yesterday I completed my third half marathon, second one this year.

Anyone who knows me knows I do not sweat. For the most part...it is a fine problem to have, until you run in the heat. I become overheated very easily. I told Chris last year that I am a vampire runner because I can only run at night. There is a lot of truth to that. The best running conditions for me are at night, prior to sunrise, winter months (which are not fun), or during the rain.

With all of that said...I woke up at 4:25 and was at Jen's to drive to Lincoln for my second half marathon of 2015 ready to go. I knew the weather was to be hot, but I was dressed appropriately and I felt ready.

I had my red bib on and was set to go in the first wave of runners. The gun went off and I felt great.

First mile: 7:24. Oh no...I am going to fast.
Second Mile: 7:26. OMG...what am I doing. I am getting hot too. Where is the water?
I remained in the 7s for the first 10k, then started slipping. I didn't think there was enough water for the conditions. It was hot. The sun was beating down and I was so hot. I was pouring the water on myself by the first water stop. That is not a good sign.

By the 10K mark, I knew my race was not going to end well. I tried to eat my fruit bar and could hardly swallow it. Where is the water stop? It was MILES ahead. Ugh.

By mile 10ish, I ran up behind a girl who had stopped to walk and I stopped with her asking her if she was in the half or full. She was in the half. Yeah!! So, we ran together. We were both hurting so cheered each other along. In the end, she grabbed my hand and we finished together in 1:43:57, over 4 minutes slower than my half marathon 2 weeks ago, but I finished!

Upon finishing, I learned that Jen, who I had seen outside of the stadium helping someone, was actually helping her friend Lori. When I saw Jen, I assumed she had finished and had come back to cheer on people and just happened to be there and helped someone out. She would do that. Then I thought I heard her say, "Come on Lori," and I wondered if that was her friend Lori. I had seen the girl as we ran by but did not recognize her (she did not look good). Come to find out, Jen had slowed and waited for Lori to catch up with her to help pace Lori. They ran together until mile 12 when Lori started to weave around on the road. Just before the stadium, Lori suffered from heat exhaustion and had to stop. She was confused, nauseated and did not remember anything after mile 10. She even asked Jen later if she had finished the run. How scary!

Unfortunately, that was not the only person we saw down as we finished the race.I felt lucky to have finished and didn't really care about my time. As I waited for Jen by the back drop (which is VERY well organized), I knew my time was limited as my stomach started cramping. Jen and I walked back to the car in Haymarket (great parking spot, too!) and I grabbed my food to eat on the way home (a breakfast trail mix from Trader Joe's). I struggled to eat some of it. I dropped Jen off and home and went home. I found Addison in her room and I rested on her bed while I asked her about her morning. I quickly knew I was going to be sick, so hurried through my shower before the nausea and vomiting set in. I did not have much in my system, which was good and bad, and quickly went to bed where I slept for an hour and a half. Chris, meanwhile, mowed the lawn and trimmed. He called when I was sick and I said I was sick and hung up. He never came to check on me. As I told him later about my run and being sick afterwards, he rolled his eyes. I suspect his lack of sympathy comes from the fact that he thinks I chose to run these events knowing I get sick almost every time...so I do it to myself. At least Alivia checked in on me. :)

And yes, I am doing another one as I had already signed up for the Heartland Marathon Labor Day weekend prior to running in Lincoln. I thought it would be good preparation for the Chicago full in October, 5 weeks later. Now...I am not so sure.

I feel fine today, just tired. I did not run. Instead I cross trained a little, walked the dogs, and called it good. After yesterday, I deserve a day of rest. :)

Until the next run... 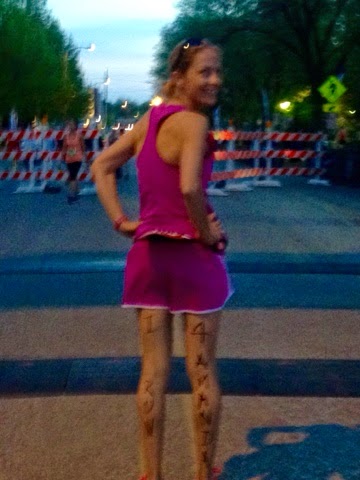 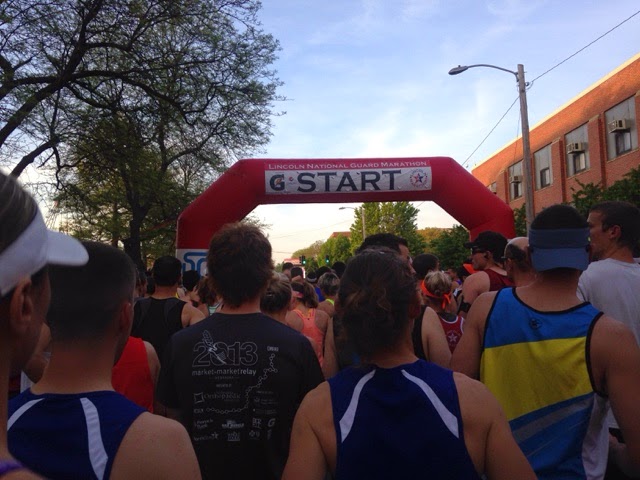 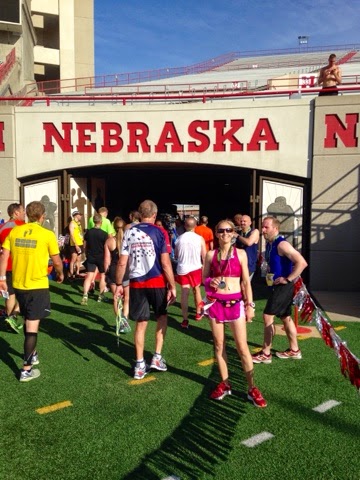 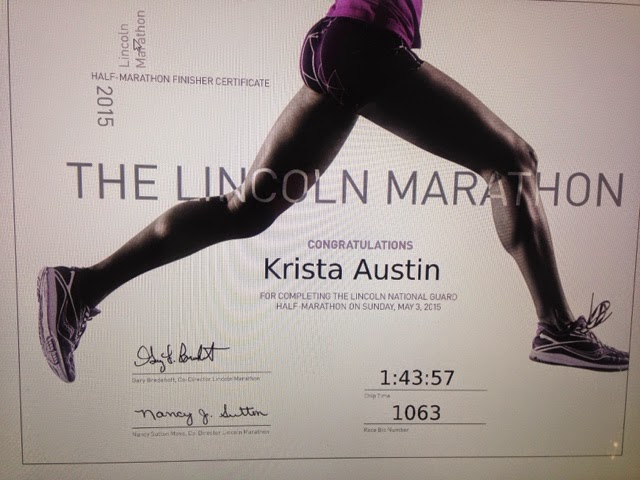