This Sunday I ran my second Marathon and my second marathon of this year. Yes, I may be nuts.

The weather turned out to be perfect. 50s to start with a light breeze. There seemed to be few porta potties with many people needing to use them before we were off for our run. We rushed through a long line and made our way to the line.

My friend Jen (who ran the half) and I warmed up a bit running in place to keep warm, stripped our warm up clothes and got in the starting area. They did not have us placed by pace (annoying!!) and we were all crammed in there. I was just hoping nobody would trip in front of me. It was not a good set up. Jen, who is clearly smarting than I am, squeezed her way up front. I remained towards the middle. Dumb decision...but I will get to that.

Where I was, the gun went off without much warning. We were crawling when we got to the start and I started my watch. I ran towards the outside to get around the slower runners (and walkers!! Seriously...you are walking already?! Get to the back then!). I paced 7:45-8 until mile 14. I felt great, but I was to be pacing at 8-815. So, I knew I was going off to fast. I had thought about resetting my watch to beep when I was going over pace but I forgot. It is so difficult to slow down when you find people around you to follow.

It was crowded until right after the 6 mile when the half marathoners turned to go back towards their finish. Finally, I could see who was running the full and find someone to run with.

I had to go to the bathroom, but I couldn't find any. It wasn't unbearable, but I thought I could run more comfortably. So, I followed a couple girls until the bathrooms finally appeared at mile 11-12. It took too long in there (lesson learned, do not drink with breakfast...save drinking to right before the run if at all!) because the paper was all stuck. Annoyed.

Out of there I felt better to get going. At mile 12 1/2 maybe, I stepped in a huge pot hole and twisted my body all up. I did not notice the effects of this until later when my hip was sore. The roads on this stretch were not all the good.

The scenery was pretty good. The run took us along the river, through Carter Lake area, through tree lined streets and another park. All in all, it really was a scenic run. After about mile 18, I could not see straight and was only concerned about my feet and shady areas. Mile 22-25 were pretty bad, slowing to upper 8 minute miles, then 9 as I walked some. Jen (who finished 5th overall in the half with a time of 1hr 30!! and first in her age group) and my friend Heather caught up with me at the 22-23 mile mark. I was dying a slow death at this point. I kept stopping and Jen kept telling me to get going...I was so close to the 3h 40min Boston cut off. I was on the verge of tears. I was a wreck. I saw the kids at maybe 23 and that got me going for a short second, too. Somehow, Jen convinced me to get going and finish, finishing in the stadium after going around a lap in a time of 3h 41min, missing the Boston cut off by 1 minute!!! NO WAY!!!!!!!!! (one less walk, shorter time in the potty, less time at water...I'm killing myself over that minute!!)

Review of the marathon.
* Scenic
* Not too hilly (probably similar to Lincoln's marathon maybe?)
* Very little crowd support
* Creighton students rocked with enthusiasm and water. So did Team Jack.
* Water was there but seemed less than at Lincoln. Maybe it was just me. There was one water station at mile 12/14 where you had to get out your own cup and get your own water. Chris volunteered here for an hour and could not keep up!
* Chris was able to bike behind me or around me from mile 14 through nearly the end. I LOVED THAT!!! There were no crowds and he was my little cheerleader. He was quiet knowing at anytime I could completely fall apart. He was there for water and just there. I did not need him for more than to be there for me. There were not too many people around me at this point, although there were at the end.
* Loved that the girls could run with me in the end. LOVED THAT!
* Police did a great job manning the streets, too.
* Metals were nice and so were the shirts. I will wear the shirt (unlike Lincoln's ugly shirt this year!).
* The results. I was officially 18th in women. But right after the race, they put my time as 4hr and 43 minutes. That was really frustrating. But, it appears to be fixed now. Too bad my time didn't improve. :)

All in all, it was an okay run. Thought the start needed much work, jamming us all in there without pace is wrong. Speaking of pace, where were the pacers?! I saw the 3h 45 minute but there wasn't one for the 3h 40 minute. The finish was not all the good either. It is really annoying to run all that way and not have anyone be able to see you finish (they did not allow people into the stadium). The stadium track was a mess with wet red sandy stuff as turf. Weird. I just wanted to run in and finish. It worked but was odd. Then they had you come outside to the food. I liked that they allowed family in there to great you, making it easier to greet family (Lincoln's meet the family set up did not work for me). I tried by banana and threw it out, grabbed an orange slice and chocolate milk but both came back later to haunt me.

After the run, I knew my time was limited as I felt the nausea at around 19 and fought it off. It was coming and fast. I was very dizzy and needed to get home. At home, I thought it was too late to eat. Chris tried to make me food, but I was getting sick before he could get it to me. I was less sick than after Lincoln, but I stayed in bed until nearly 3 (and finished before 11am).

My reward, Orange Leaf Yogurt. Chris got it for me around 5pn and it never tasted so good. I was still weak and exhausted but it was still yummy. I sat outside enjoying the rest of the day. Jen and her hubs, Dan (who is training for the Des Moines half), walked up to talk. Jen suggested I run the full in Des Moines. OMG, really?! 3 marathons in a year?! I still have not decided. I did Pilates yesterday, but struggled with feeling awful with some chest discomfort (not sure what that was!). Today I went out and ran 6 in the ran and it felt okay. I am still stiff but tolerable. I will rest tomorrow as I go back to work tonight. Des Moines is in mid-late October...so 3 weeks from this Sunday ( or 4 weeks between marathons if I do it.). We will see. 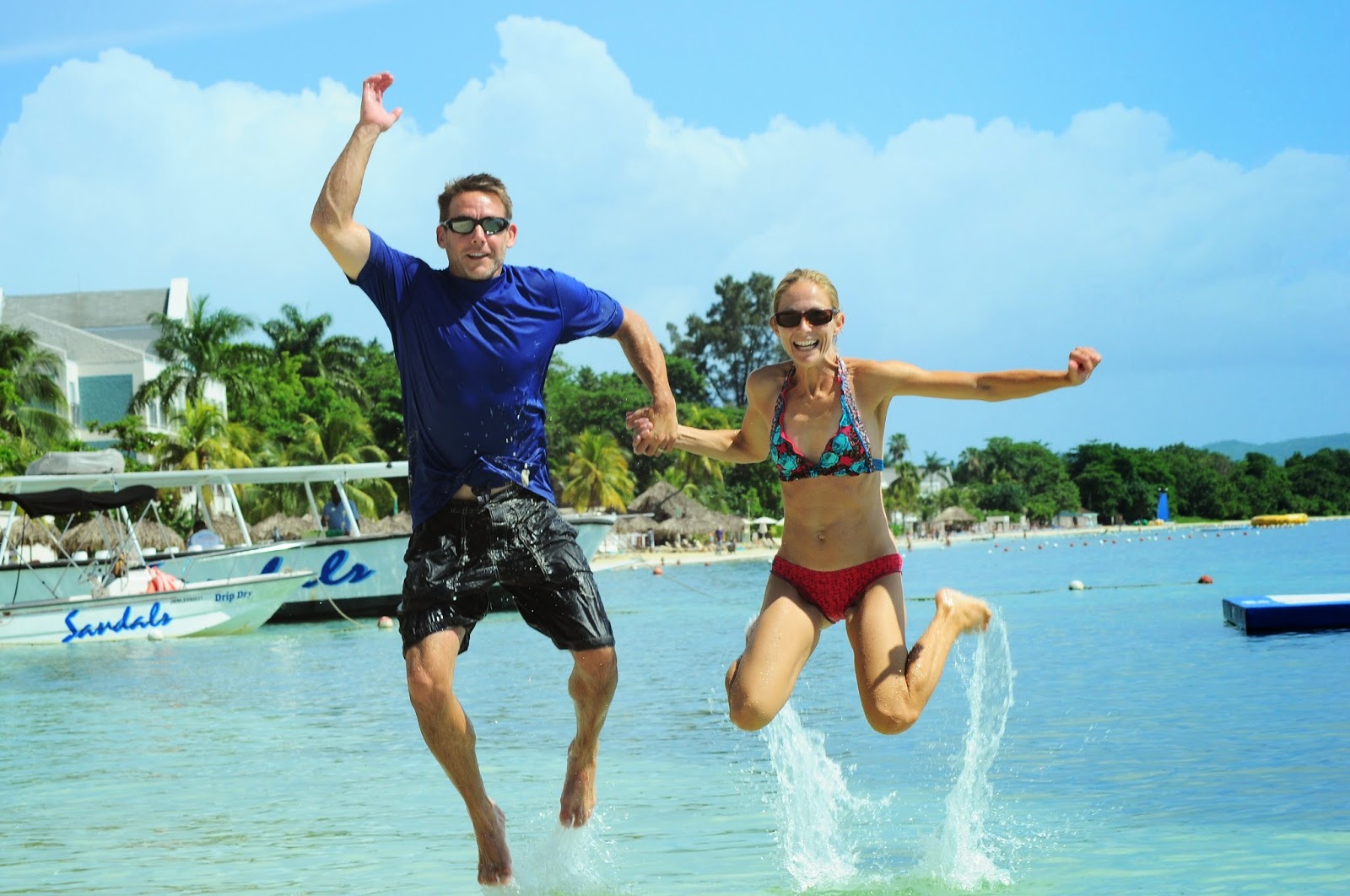 On August 28, Chris and I celebrated our 15th wedding anniversary. Although it seems like yesterday that we were married in a Church in Omaha in front of friends and family...so much has happened! We both went back and completed our masters degrees, changed jobs a few times, moved from an apartment to our first home to now our second home in Papillion. We had three little babies and have watched them grow. I quit my job and became a stay at home mom...to today where I am back to work on a part time basis. Our life has been crazy, fun, challenging, fulfilling, all on one!

To celebrate, my parents came down to take care of the kids and Chris and I took off to where we had our honeymoon at Sandals in Negril, Jamaica. We left early on Wednesday, August 27, arriving in Negril 12 hours later. Our flight in was interesting to say the least as storms from a hurricane made it a white out. The pilot "missed" the approach and took off again, circling the airport for a while. What a beginning!

Once at sandals, Chris and I settled into our week away. The resort had changed since we were there, but we tried to overlook everything and enjoy our time. We took daily 6 mile runs on the beach followed by Chris time in the gym. We would clean up and hit the buffet breakfast where we had made to order egg white omelets, fresh fruit, fresh fruit smoothies, and Chris got a pile of bacon! After breakfast, it was time to snorkel! Chris wore his gopro and captured all the fish we saw on the reef, through the caves and more. Very cool way to cool off in the mornings. We would come back from the morning snorkeling trip and float in the ocean on a raft while sipping on non alcoholic frozen fruit punches (they are so yummy!). Between relaxing, we would go off on on the kayaks or paddle boards. We loved the paddle boards! Lunch was another buffet where we loved the grilled fish and more fresh pineapple. It usually rained some in the afternoons, which was perfect for naps or chilling on the beach under the covered beach chairs. Time flew by. Chris and I were able to have endless conversations without interruptions, something that rarely happens at home with 3 kids that do no like it when we talk to each other, only to them. :) Night time was a more formal meal at one of the many restaurants where we have grilled shrimp, dinners on the beach, lobster, pizza one night, chocolate one night for dessert, and more. The food was quite good (they just didn't seem to give very large portions though) and he desserts were amazing. Chris and I tried everything since Sandals is an all inclusive. We tried some of the alcohol specials, like a watermelon margarita, Jamaican smile or the Bob Marley. They were all okay, but I liked the blended fruit punch sans the alcohol better. :)

We met a few couples, one we spent 3 hours with one night who were at sandals 15 years ago when we were and were from Iowa! Small world!

All in all, Chris and I had an amazing trip. I would highly recommend a break away with your spouse alone...there is nothing like it. Yes, family trips are important too as we only have a few cherished years to travel with our kids while they still like us :), but strengthening the bond between parents is important too. We hope to continue our annual long weekend trips on anniversaries, with our next bigger trip on our 20!!! Year anniversary! Wow, we are old.

Now, our trip was amazing because we were there together, but don't go to sandals resorts. Jamaica itself is poor, so they will do anything for your money including beg and steal (did both to us). The beach peddlers get annoying after about an hour. The paparazzi at the resort are more than annoying and the pictures will cost you more than a new camera. The people working for sandals were not respectful. For what you pay, you expect luxury. Our home was luxury in comparison.Let's just say, with all the negatives and so many other places to visit, go to a different country or stay in the US and at a non sandals resort. We are already talking about where we want to go next.
Posted by The Austin Life at 9/10/2014 11:56:00 AM 1 comments