Merry Christmas from the Austin Family 2016 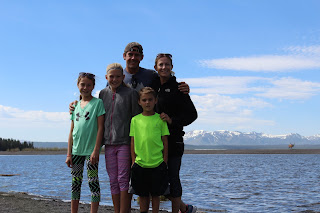 Merry Christmas from the Austin Family!

What a year! I am sure we say that every year, but this year was plain busy!

Chris has been busy at work for Nelnet where is a UX designer. Don't ask me what that is because I have no idea. I need to Google it someday. 4-5 days a week, you will find Chris setting his alarm for 4:20 so he can get up and hit his 5am Cross fit work out. Now, I would call that plain nuts, but I can't talk (I'll get to that). He wants to keep his body strong and young, although he tells me every day how much "older" he is than me. So funny. Chris always enjoys helping assist on Alivia's soccer team. He likes the attitudes of the girls, and they seem to really like his positive coaching. In July, Chris and his brother attempted to summit Capitol Peak in Colorado. They got close, but realized they may have bitten off more than they could chew. I am sure they have dreams for their next hiking adventure, but Chris tries to keep these dreams a secret. Chris also ran his first 1/2 marathon! He did a great job, and there may even be talks of running another one! Chris has big dreams for 2016, so it will be interesting where he takes us in the upcoming year.

Alivia is now 12 years old and in 7th Grade at the Papillion Middle School. Yes, she is in JUNIOR HIGH! CRAZY! I am telling you, Chris and I can't seem to keep up. Alivia is an active girl, taking soccer up after Chris and running, maybe, after me. She ran in Cross Country this year making the State Team, which she was quite excited about. Let's just say, there are way more girls at her meets than I ever saw back in the day. Alivia likes to play striker in soccer, but plays any position except goalie. She is quite "dainty" as my Mom likes to say, so needs to work on her aggression a little. She will get there with all of her passion. She is now in the midst of indoor soccer with the Papillion Soccer Club. She spends her free time meticulously doing her homework, helping with the household cleaning, and hanging out with her friends (notably Katy). She is quite the responsible preteen these days. No boyfriends yet, but she has a boy who would love to change that. Alivia actually told the boy "I am too young to date!" We love her.

Addison is now 10 year old. She is quite the handful. Really. But we love her all the same. "Addison is creative," Chris tells me often as she spills paint all down the hallway (we now have new carpet).  Addison does like to create. She paints canvases, works with clay, paints pictures, and is getting better everyday on the piano. She has an active imagination and is already looking to the future. She wants to be a vet and will decorate her clinic with her artwork. Addison spends her time creating and playing with her friends, notably Sidney and Avery.

Asher just turned 9 years old. He is very active. He is usually having a Nerf war with some of the endless boys who show up at our house to play or he is playing a game of soccer here or at a game. Asher had a tough year in soccer (I will NOT get into that nightmare), but he showed how grown up he was and never shed a tear (where I would have been crying the entire season. Oh wait, maybe I was.). He is now at a new, more respectful (we hope) soccer club where we hope he gets to play soccer and have fun. Asher is also playing indoor soccer. Asher has a fun sense of humor, too, although Addison and Alivia struggle to see it sometimes.

And that leaves me. I am boring. I'm still working for Noll a minimum of 24 hours a month where I float between local CHI Hospitals in their behavior health units. I try to work 2 twelve hour shifts during the school year (and in the off soccer season) and work MUCH less in the summer, sometimes just getting that 24 hour a month minimum in. The biggest perk is that I get to pick when I work. The way I look at it is, I left my career to stay at home with the kids because I did not want to miss them growing up. Working during the school year allows to me to work while they sleep and are in school without missing much. Win win. The nights are totally killing me, but that's a whole other story. In my free time (that small window where I am not grocery shopping, doing laundry, cleaning, or fulfilling some other mom duty) you will find me running or doing my BBG workouts (Google it. They are awesome!).  I tend to set my alarm way too early to get my daily run in, too. In April, I achieved my dream of running the Boston Marathon. The marathon itself was not how I dreamed it to be, but finishing it was. I only ran one other half marathon with Chris in the fall, and it was just as ugly. Chris believes I should retire from running races as my body rejects them, but we shall see. I have no big plans for 2016, but I just hope to enjoy the year.

My mom taught me the importance of family vacations. The entire family (my parents included) went on the trip to the Boston Marathon in April. The kids had a blast, and Alivia left with the goal of running it someday. We also took a road trip to Yellowstone, Tetons, Jackson, and ending at Estes Park and the Rocky Mountain National Park. We did a lot of hiking and sight seeing. It was a lot of fun, and we saw beautiful country! We ended the travel year in July with 21 days at my parents lake home at the Lake of the Ozarks. Lake life is so relaxing, but 21 days without Chris got to be a bit long. We are looking forward to our annual trip again this year.

From our family to yours, Merry Christmas and Best wishes in 2017!