On Friday, our little girl Addison turned 7 years old. She wanted to celebrate in style and had a whole day planned. But, if you know our Addison, her plans are never concrete.

Addison woke up to excitement for her big day. After a brief breakfast, she opened her glow pet that she has been asking for since well before Alivia's birthday. We have heard so much about this glow pet that we did not want to wait any longer to give it to her. She was, of course, thrilled!

Our day started early, with a 9am hair cut appointment in northwest Omaha. We left our home at 8:45 (ooops). Clearly, 9am was a bit too early for us. Addison wanted to donate her hair to pantene hair donation on her birthday. But, once she arrived to Concepts Salon, Addison only wanted a few inches cut off. Really Addison?! 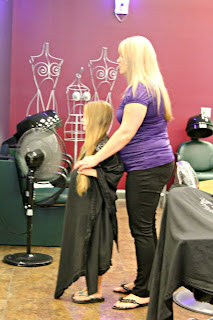 Addison did get 4-5 inches cut off of her long locks, just not the 8-10 that she had planned. She always had her hair styled and her nails painted, but she skipped the make up. Alivia also got all dolled up.
Next up, Addison wanted her ears pierced. Alivia had hers pierced on her 6th birthday. Although Alivia was scared, she thought it was something she was supposed to do. Addison, on the other hand, has been really hesitant. We arrived to Claires (where else do you go for this anymore?!). Addison picked out a $55!!! earring piercing package (unbelievable!), had her ears marked. The gun came out of the box and Addison was out of there. That was that. She was not having her ears pierced. Maybe next year, she said. See what I mean about plans? :)

Our next plan was to play at the park with friends before library picnic story time (after the story, each kiddo gets to select a new book to keep). The kids played at the park, had their picnic and selected a book. However, our friends were sick and could not make it.

We then came home to prepare for Addison's big 7th birthday party. For Addison's birthday, she asked for an inground pool. She had a friend come for a play date early in the summer. Maybe 15 minutes after arriving, this friends' mom came and picked them up because their neighbor invited them over to play in their inground pool. The little girl said she would come back to play when Addison had an inground pool. Are you kidding me?! I was not sure whose behavior was more shocking, the girl's or her mothers. I mean really, the girl left before her mom picked her up to go to a better play date. The whole thing is shocking. I told Addison, one, the girl is not a true friend if she means what she said. Two, pools cost as much as 2-4 cars (and our cars are old and have 100,000 miles on them, so mabe 10 of our cars. :) ), and three, that little girl would never be invited to play in the pool if we did get one! With my explanation, Addison still beleived she would be getting a pool (like we could sneak one in the ground over night while she slept of something). Well, to make her somewhat happy, but knowing we would probably get one of Addison's worst stink eyes anyway, we bought her a blow up pool slide from blast zone. The thing cost a small fortune, but not as much as an in ground version would have set us back. In the end, Addison was quite thrilled with the slide. We got out her new slide, the blow up pool and a bunch of pool toys and that she celebrated turning 7 with a splash with her friends. 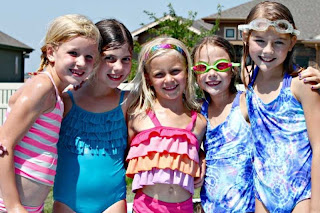 She got some nice journals from Justice and a bag full of art supplies. She was excited by all the attention and presents.

Next up, the dinner party with her Grandparents. We grilled hotdogs and hamburgers and celerbated some more. She received a much desired fur real horse from Chris' parents and a new bike from my parents. Both gifts have been used a lot already since Friday's party.

Our little Addison is growing up. She is tall for us (50%) and skinny, which is typical for us, but healthy. Addison, even at 7, is always seeking our attention. She likes to read, draw, play with her millions of puppies, is usually walking around with a stuffed dog, likes a few close friend opposed to having many not so close friends, likes the color purple and is a healthy eater. Addison is, by far, our biggest challenge. She whines more than any child her age I am sure of it. She typically whines and whines. If you cave and give it to her, she still whines (so we never cave because we can never win). She is an award winning stink eye giver and gives us looks that could do serious harm. But, she has an amazing and beautiful smile, if you are lucky enough to get to see it. Chris and I would have our lives too easy if we did not have Addison, so we will keep her. :) She keeps us on our toes, that is for sure.

Now for her birthday questions, favorites:
Fav color: Purple
Toy: Horse and glow pet and new dog from grandma Bet
Fav fruit: Apples, grapes
fav thing to eat for lunch. Watermelon (or a chips and cheese lunchable that I will not buy her :) ).
Fav game: Baking games, Animal Jam
Fav snack: Pringle sticks
Fav Song: Puff the magic dragon (ask Chris about this one!).
Fav book: Elephant and Piggy
Best Friends: Kate, Haley and Kaityln
Fav cereal: chocolate mini wheats, cocoa puffs
fav thing to do outside: ride in the jeep, scooters, swim
Fav drink; COKE! (Ask Daddy again! She never gets coke).
Fav Holiday: Christmas
What do you take to bed with you at night: Glow pet, stuffed dog
Fav thing to eat at breakfast: Mini donuts, waffles, bacon
What to eat for your birthday? Hamburgers
What do you want to be when you grow up? A vet or a teacher.

Addison said she had a great birthday! Happy Birthday little Addison! You continue to amaze us everyday. We love you! 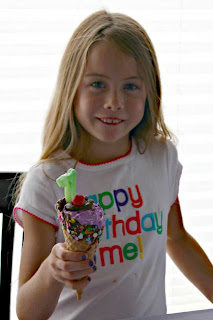 This year we visited my parents home at the Lake of the Ozarks Friday, June 28 through Friday, July 5. Asher stayed until Sunday, July 7 with my parents.
We arrived to dropping temperatures. It was 80 at 8pm when we pulled up to my parents home. I thought it was weird that it was warmer at home. Little did we know that 80 would be the warmest we would see it until the end of our trip. The first couple days we just chilled by the dock. The first morning it was 67 degrees. I went running and was shocked to not get hot (but I saw a deer and my first ever armadillo!).  Anyway, even with the cool temperatures, the kids jumped right in, going down the slide. Chris got in, too, God bless him, as I sure was not getting into the cold water. The kids played in the water on and off during Saturday and Sunday.
Sunday night, my parents arrived. We then got out the jet skis and took many rides, the boat for scenic rides as well as to go tubing. All the kids love to go tubing (with Daddy) but my body just can not hack the jarring of tubing. I'm a nervous wreck just watching the kids tubing. Addison and Asher liked to go on canoe rides with Chris and I, seeing deer, big bullfrogs and water snakes. Addison was so mad I could not catch this huge frog the size of a raccoon. Honestly, I did not want to be anywhere near it, let alone catch the thing in the net! Asher liked to go in circles really fast on the jet ski with Daddy or Grandpa (Mommy was too slow), Addison liked to go slow on the jet ski, and Alivia drove the jet ski like a mad woman. She did slow down (under 60mph) after I told her 40 mph should be her limit. Gees! I was glad she went speedy with speedy Grandpa and not with me.
We took the short drive over to Osage Beach to go to the Outlets and to Grandma's Candy Store. We learned after this trip to make the shopping trip to the candy store late in the trip (so you only CAN go once) and leave the kids at home with Grandma and Grandpa when going to the outlets. Gees! I at least got a nice new yellow nike hat that I have already gotten my money's worth out of and Chris got some new Nike t-shirts. The girls, of course, loaded up at the Justice outlet (sigh!).
This was our first Fourth of July at the Lake. My parents' neighbor took us out in his beautiful new pontoon boat to see the show on the water at Tantara resort. It was fabulous! It was cool to see all the boats floating in the water waiting for the show, too. Amazing show.
It was a wonderful trip to the Lake, as usual. Now...for the list of family favorites.
Alivia: Learning to control the jet ski (with assistance), swimming, tubing, going down the slide, oreos, hot chocolate for breakfast, and Grandpa's home made ice cream.
Addison: Canoe rides, slow jet ski rides, the slide, eating candy, slow tubing, and sleeping next to Mommy and Daddy most of the nights at the lake.
Asher: Canoe rides, fast jet ski rides, tubing, Grandpa's Huge hamburgers with a slice of bacon on them, and getting to stay later with Grandma and Grandpa. Oh, and Asher loves candy legos and gummy worms from the candy store.
Chris: sleeping in, not working (although he did work anyway), canoe rides, jet ski rides, time with the family, shopping with me (love the metal store! Next year I am buying me something there!), and maybe a little tubing.
Me: Canoe rides, quiet runs in the mornings with my parents' dog Kota (but with brown bears in the area, running may not be very smart), jet ski rides, grandma's swing over the water, Grandpa's state of the art new dock.

Dislikes: the brown recluse spiders we saw. I hope the spray man gets these things before our return. YIKES! We had one crawling up behind our bed as we were about to crawl into it late on the 4th of July. Chris and I had insomnia that night! I wonder why?!

With that said, I am tempted to make a return trip to the lake. Seriously. I have not said anything to anyone, but I like the chill environment of the lake. It is so laid back and nice. I miss that when I get home, to reality. I need to take a piece of that laid back life back to Nebraska...and I think I left it all at the lake. I must return to get it. :)

What a crazy month June was! We kicked off summer with Catholic Education for 2 weeks, then swimming lessons for 2 weeks, ending June by going to the Lake of the Ozarks (which will be in July's pictures). We visited the Omaha Children's Museum, Durham Museum, Gene Leahy Mall and went to the pool. The kids had many play dates, too. Asher, at 5 1/2, lost his first tooth and then his second tooth a day later. We celebrated Father's Day, Alivia ran her 2nd 5K run in Shelby, Iowa, Daddy continued his hunt for his next perfect job (still hunting). The month went by too quickly, though. In less than a month, all of our kids will be in elementary school! Gotta run...time is running out to enjoy the rest of the summer! 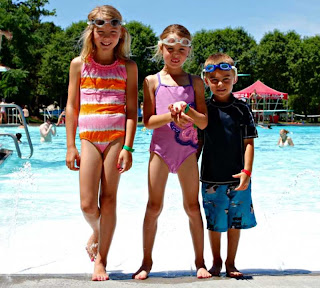