It's been a year since we went to Disney World.

Better late than never though, right?

Without a laptop, I am finding it difficult to keep up on these photo books. I will buy a laptop this year. I will. :)

The photo book is nearly complete. I have images I would like to add but Shutterfly is not allowing me to add images (seriously frustrating). So...until then, I wait. But it is so close!

So...here is our photo album for Disney. Now I want to go back!

What a Year Already

Our 2016 started out as a typical year full of expectations and hope. Then this happened. This, meaning last week. 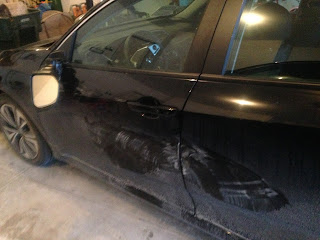 Chris calls on the way home from work saying, "I've been in an accident."

His car. We had yet to get the title for his car in the mail, so it still had the in transit sticker on it. But, his car was banged up and bruised badly on one side, mirror dangling. A man driving a big Ford F-150 ran into the side of Chris' car because he "Didn't see him." OMG, I was crushed. Chris was sick. This was Tuesday, Addison's half birthday. Addison was so excited to go on a date with her Daddy to China Buffet. She had never been there but wanted to try it.

Chris pulled it together and drove the Pilot to dinner.

Gees. He is unlucky. First the windshield in the Pilot cracked the first time Chris drove it (Yeah, thinking that was not a coincidence). Then this happens to his car. His car was so bruised he didn't want to drive it to work the following day. So, he borrowed his Mom's car. 3 minutes out of the neighborhood, he got a ticket.

We are off to a great start! Off to traffic class he will go this week.

He did take his car into the recommended auto body place by Honda. They are able to get the car in the first week of February. It requires 2 new doors, a new mirror and some body work and paint. The good news, the owner of the big truck did say it was his fault and his insurance will cover the nearly $4000 in damages.

It is only the middle of January.