So I am a week into my 4th Whole30, 3rd one this year. I can say right now, after this time I am done with Whole30 for a while.

This Whole30 is to prepare me for a big hiking trip Chris and I are taking this month. Although yesterday was the 3 week mark, I feel about the same. I hate all the food I am eating, though. I can no longer eat veggies for the most part after my second Whole30 (I ate so many that thinking about making them makes me gag). I eat zucchini and sweet potatoes now. I am trying to follow the FODMAP diet too so that my body is not so messed up all the time. It is harder to follow because I can not have riced cauliflower or watermelon, both which were my favorites.

This time I usually eat an egg white and mixed fruit with coffee (if I am not working) for breakfast, a hard boiled egg with honeydew/blueberries/strawberries mix for lunch, and a variety of things for dinner usually including a salad with protein of some sort. It has been difficult considering it is summer to keep this up with my kids on the go all the time, but I have made it work. I have weighed myself, and I have lost 1 pound. I really wanted to lose like 5 pounds, so eating this way has not been worth it in that respect. I gave up the fun and weigh the same I always do? Ugh.

So, after our trip, I will go back to just my regular mostly healthy eating. If I need to watch my intake, I will just do that. But I do not believe I will be doing another Whole30 for a while. I need more energy to keep up with my kids, work and husband! :) 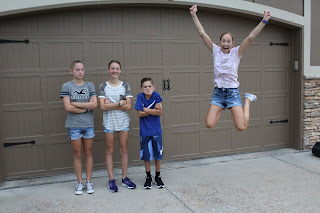 August 14, 2018 marked the first day of school for Alivia (into Papio South 9th grade), Addison (into PMS 7th) and Asher (the last remaining Austin in Elementary in 5th). 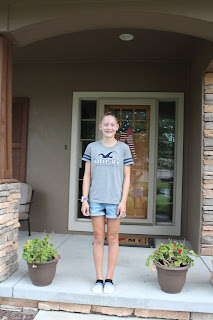 Alivia had been a nervous wreck in the weeks leading up to the start of high school. High School here is a much bigger deal. By that I mean BIG, as in she may have 500 students in her class alone (I don't know the exact number of students though). Compared to the 40 some students I graduated with, it is big. After the first freshman only half day, Alivia had more confidence. Fingers crossed that she will have a great Freshman year. She is out for cross country now, running up to 11 miles so far. I still can't get over how she is in high school! 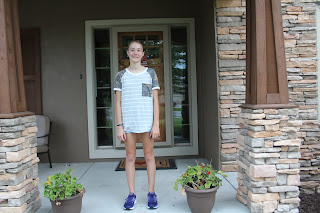 Addison started middle school, 7th grade, yesterday, too. She was very nervous as well. After her half day, she felt like she would like it. She knew very few people in her classes. I am just hoping she has lunch with someone she knows. Yesterday and today she carpooled with her friend Halle so they could walk together into school in the morning. That seemed to help Addison get going. Addison is very shy so this will be an interesting year to see how she does. Addison is also going to give cross country a try. We shall see. 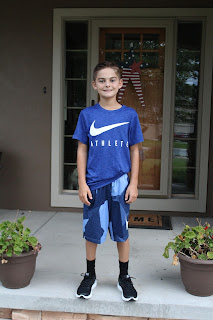 Lastly, Asher is in the 5th Grade, having Mrs. Johnson, who both Addi and Alivia had in the 5th grade as their teachers. Asher was VERY disappointed that he was not in class with his friend Michael. Asher can be a little dramatic about such things and got VERY MOODY when he found this information out. Next time, I will not tell Asher his teacher assignment or his classmates and just let him find out on his own. After the first day, he was better about everything. He was disappointed about Michael still, but he really needs to find more friends. 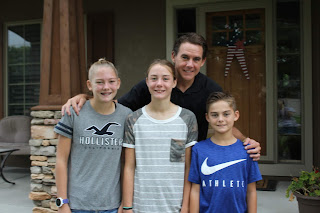 And Chris and I survived day 1 too, carpooling between 3 schools and soccer. Right now, Alivia has carpool with Katy. But that is short term. Addi really does not have carpool lined up. And, I take Asher. I will do more of the picking up of Addi and Asher, Chris will pick up Alivia after cross country. But with 3 kids, 3 sports, 2 working parents, this is about to get really complicated. Wish us luck!

We usually get to the Lake (Lake of the Ozarks that is) for the entire month of July. Our life has changed so much now that Alivia is going into High School! Alivia did not want to miss running club, so we stayed just shy of 2 weeks, planning on returning for a weekend. Then, life happened, the weather was bad, and we never got back to the wonderful lake. We are sad about that, but lucky we have our 2018 Lake memories.

We (Alivia, Addison, Asher, Addison's friend Sidney and I) left for the lake on July 3. We got there in time to swim, tube and for Liv and Asher to water ski before the busy 4th of July. We went out on the water and watched the fireworks until a few of us were sea sick (the boat was rocky this year!). Grandpa Bill and Grandma Bet host a great 4th of July!

Per our usual, the days are spend in the water. I get up early and run and sometimes do my weights too before everyone gets up. My morning runs opt me an opportunity to sea all the lake wildlife and get my ass in top shape as running there is a total workout with the crazy hills! UGH. The kids get up and want Grandma and Grandpa's breakfast of eggs, bacon and cinnamon toast. Then, we head down to the water for tubing, water skiing, swimming, etc. (I swim to the buoy 8 times at least a day. This is a big challenge for me as I am not a good swimmer). We visited Grandma's Candy twice this year and the outlets once. The outlets do not impress us anymore because the outlets near us seem better.

The last couple years the kids have invited friends. This year Sidney was with us the entire time. On July 10, Chris came down to spend a few days with us and help celebrate Addison's birthday and brought Alivia's friend Reina.

Alivia and Asher got real good on water skiing, both going over the wake for the first time this year. Reina even got up on skiis for the first time. She got over the wake too, but struggled to get back over. Chris skied showing he still has the moves. I tried to ski, practically knocking myself out when I hit big waves (I slammed into the water so hard that I saw stars).

We had a fabulous time! We love the lake! 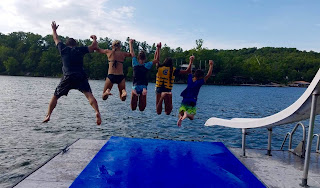 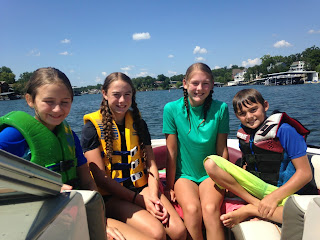 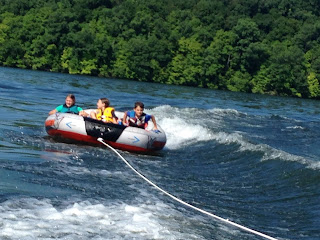 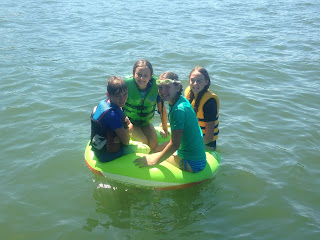 Oh Lord, I have not been good about Blogging. If I ever get around to making a 2018 photo book, I am not going to know what to say!
Anyway, In July, among ONE friend, Addison turned 12. You see, in June she invited 2 (other) friends to her birthday party. Neither came or could come sadly. Addison was crushed. Luckily her BFF from Texas FLEW to Omaha to spend 2 weeks with us at the Lake. Sidney basically swam through shark invested waters so Addison could have a Happy Birthday! What a friend.
At the Lake, we skied, swam, tubed, went on a boat ride, went to Grandma's Candy at the Lake, and ate all of Addison's favorite foods (steak, mashed potatoes, corn, and chocolate cake). Addison did not believe we were paying much attention to her on her birthday saying we were treating it like just another day. Humm...I thought it was pretty damn special!. :) I will have to try harder next year I guess.

Addison's 12th Birthday Questions: 1. Favorite Color: purple 2. Toy:Trampoline 3: fruit: Raspberries 4. TV show: Anne with an E ??? 5. Thing to eat for lunch: Spaghetti 6. Outfit:  Purple Nike outfit I got for my birthday 7. game: Old Maid (we were at the lake lol) 8. snack: cheesy pretzels 9. animal: Dog 10. song: My Wish 11. book:  The Underneath 12 best friend: Sidney  13. cereal: Chocolate Cheerios (but as I type this, she won't eat these anymore). 14. favorite thing to do outside:  Swing and jump on the trampoline 15. drink: Lemonade 16. Holiday: Christmas 17. What do you like to take to bed with you at night: Stuffed animals 18. Favorite thing to eat for breakfast: Pancakes and bacon 19. Birthday dinner: Steak and mashed potatoes with either chocolate or red velvet cake (we had one of each at her 2 parties0. 20. What do you want to be when you grow up? A farmer! She needs to work on this one!

Hard to believe Addison will be going to the Jr. High in less than 10 days! She wants to go out for cross country. For a non runner, this should be interesting. We shall see. Addison is the creative one in the family, always taking up knew art projects

Happy Birthday Addison! We love you! 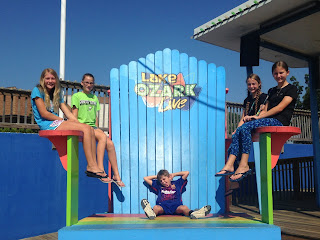 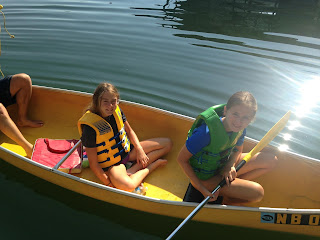 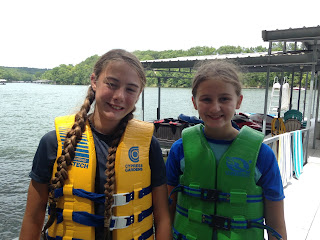 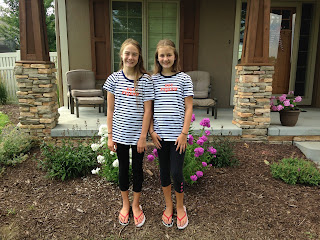