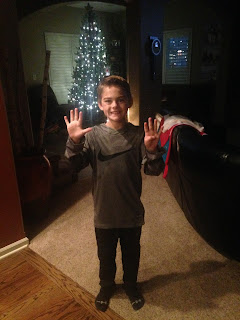 Life is getting ahead of me. Totally. I am now only blogging on birthdays?!?! What has happened? Makes me so sad.

Anyway. Asher is now 9. He celebrated much of the month of November. He had his friend party on November 19th to beat the Thanksgiving rush. He had a nerf war party. Happy to report, no injuries. :) Yeah!

On his birthday, we had the Grandparents over for his choice of dinner. This year he selected to have Mamas Pizza and DQ ice cream cake. Let's just say nobody left hungry. Asher's dream was to get Nerf guns. Well, he got much of the guns he asked for (saving the rest for Christmas).

Asher, who is on the small side for his age (15% for height and a little less for weight), is full of energy. He is usually on the go. If he isn't having a nerf war with the neighborhood boys, hanging out with his friend Michael, or playing soccer, you may find him chilling somewhere with his iPad watching Nerf war videos (no joke!. He likes to watch twin toys or something). He is a usually sweet boy but has broken much of our home. If it is not broken, it probably is soon to be broken. Currently we have a broken fireplace shelf due to Asher trying to make a fort with weights and it not working out well. He is a boy, so I am told I need to forgive him. :) Asher keeps busy with soccer year around. This year has been a challenging year. He just recently resigned (sounds better if I call it that) from the Metro Omaha Wolves. Don't go there is all I will say. His coach was downright scary and the director did not care. Three boys left the team and Asher was one of them. They did keep most of our money, however, adding fuel to my raging fire. I wish there was a complaint site for horrible soccer clubs! Asher is playing indoor now and will soon join a new team. Here's to hoping this next team knows how to treat kids (and not abuse them!). But, Asher stepped up and talked to the coach of his team (who was mean) and acting all grown up about it. I found that quite brave for a small 8 year old. Just saying. :)

Happy 9th Birthday Asher! I just hope I can continue to keep up with you! 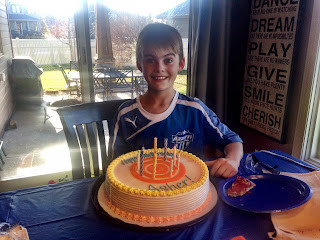