The Last Day of School 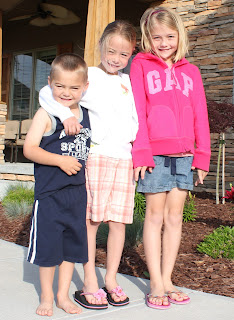 Today was the last day of second grade for Alivia and the last day of Kindergarten for Addison! They were so excited they were nearly obnoxious this morning. Addison was out of control. We walked to school, hoping to exert some of that built up excitement.

At pick up, Alivia was sad to say good bye to her class mates and to Mrs. Eller. She really loved being in her class. Addison gave Mrs. McMains a big hug. I am not sure Addison realizes that Kindergarten is over, even though I have told her. Since Addison said she wanted Ms. Erickson next fall (like Alivia), I did put in a request for her to be in Ms. Erickson's class. In the end, I think it will be harder for Addison when her two BFFs are not in her class (as Alivia has never been in the same class with any of the girls yet). I have the summer to prepare Addison for that. I am sure she will be okay, but she is already mad at me for having to go to Catholic Education this summer without Kate and Kaitlyn (when Alivia has a friend, Gabby, who will also be going).

They had a great year. They both had great reports from their teachers. Now onto summer fun!

After school, we loaded up and met some friends at a Ralston playground with some shade to enjoy a picnic. The kids ate, played and ran around. It was a good way to mark the end of a great year! 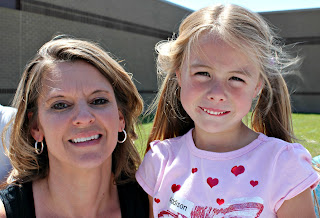