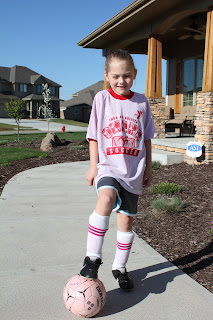 Saturday was the first soccer game for Asher and Alivia. Of course, they were at different locations a half hour apart making it impossible to see both of them  play (big bummer!). Great way to throw us into soccer.

I will start with Asher. Chris, being Asher' team coach, took Asher. Asher's game was at our local YMCA, so it was close. This was Chris' first coaching experience. Chris did not know what to expect considering the players are 3 and 4 years old. He had higher expectations than these little kids could fulfill. Let's face it, 3 and 4 year olds do not have do not have a long attention spans, as Chris soon found out. With the help of a friend and his parents, he was able to pull it off. Asher was not aggressive at all. He got kicked once and was pretty much done after that. Asher now says he no longer wants to play. Great.

Alivia. Oh Alivia. She really did say she wanted to play soccer (and Addison said she did not want to play...so we did not sign her up). With that said, one would never know that from the way she acted at the game. First, I had to practically drag her onto the field  as she cried she did not want to play. Really? She is nearly 8 years old! Once out there, she warmed up. Okay, I said she warmed up, not that she really wanted to play. She kicked the ball once, maybe, and that was because the ball was kicked and hit her foot. Seriously. But, she did kick it away from her, so I guess that counts for something. She followed the ball nicely, but stayed a good 8 feet away from it. So, she needs time to feel comfortable playing. Her friend Gabby plays with her. Gabby is really good, outgoing, and somewhat aggressive. So, maybe Alivia will watch her and pick up some of her moves. We can only hope. There is always next week, right? There was about 40 minutes left of the game when Alivia first asked me if it was about over. She did finish the game and was thrilled that there were treats given out in the end. I hope she is not disappointed that I am bringing the treats this week. I believe I will sneak them to her coach so she believes he is handing them out. That makes him special. After all, I always feed her.

So, we are off, however slow. We are not in soccer to play to the death, thank goodness, we are just in it to learn if they like the sport. So far, it appears none of our kids have Chris good soccer genes. Maybe they will run far or fast like me. :) 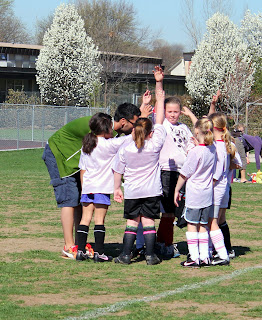