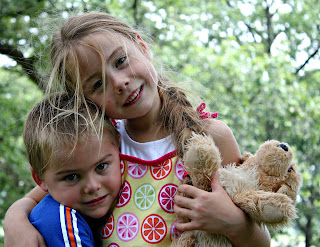 Well, we survived our overnight stay at Grandma and Grandpa's, barely. Gees!

I worked out at the break of dawn, finishing as Addison woke up. The girl just does not sleep long.

The kids were outside playing before 8am! The played outside, played downstairs and played outside before I was able to convince them to go to the new park of the week, Prairie Rose State Park.

We arrived to an empty park! We saw one camper that was all covered up but there was a car there (so I assume there were people there, too) and one park worker...that is it! The kids played at the playground near the campground all by themselves. I watched them play as birds sang. It was hot, muggy, yet peaceful. After they played, we drove around to find a nice, shaded place to picnic. The lake was drained last fall, I believe, and is dry and full of natural grasses. We did see two deer drinking from a little pond, though.

When we went to leave the park, Asher said, "Thank you Mommy for taking us to this fun park!" and Addison followed him thanking me. So sweet! We saw the beach, that now went right up to some weeds. The playground on the beach side looks like a little little tikes playground, but I guess it is something for 2 year olds to enjoy.

We went back to Grandma and Grandpa's house to cool off a bit inside. The kids needed a minute before they went on a scavenger hunt for treasure left behind be pirates, so they said. They found some loot all right...pantyhose, hand sanitizer, many bones (probably left behind from their dog Kota), etc. They had a blast. Addison was in the cat house frequently to make sure the cats were still there. She loves Grandma's cats...too bad the cats do not like people.

After a fun afternoon...the whining and bickering came back, full force. Oh, time to go home! Both Addison and Asher slept the hour drive home. Clearly the heat and fun of our day's adventure had gotten the best of them.

We will return to Grandma and Grandpa's for a sleepover, I'm sure, but I am not sure I will ever do that alone. The kids had a blast, and that is all that matters.