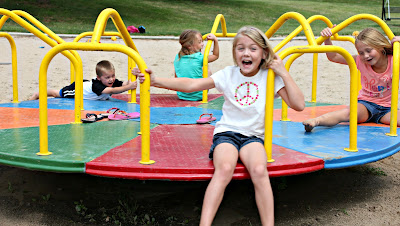 I try so hard to make every day of summer break full of fun. Seriously, that is really difficult to do. For one, all the kids do not agree on what fun is. And two, it is tiring on Mommy to be gone out doing stuff all day long. :) I know, rough job.

Yesterday, we met Addi's friend Kaitlyn and her brother (Asher's friend) Will at the kids' elementary school for summer reading, storytime and crafts. It was a blast! The kids got to see some friends from school, too. Afterwards, we set out on our "find a new playground" adventure.

We started finding a new park a week when we lived at our previous address. Okay, there are a ton of parks in northwest Omaha. Here, not so much. But, we will try. Monday we tried a park in Ralston, Woodbine Park. Ralston usually has good playgrounds, but this one was just average. The kids had plenty to do to keep busy since I packed sand toys and Asher's trucks. But, even so, this was just an average park without bells and whistles. We will probably not return to this park because it will be forever known as the playground Alivia did a face plant at. Yes, she was racing a boy about her age (who was there without any parental supervision I may add) when Alivia slipped on the sand and fell flat on her face, scrapping her elbow, hip, leg and of course, her face. Embarrassed yes, really hurt...well, maybe her pride. She was fine overall, though.

So, on Wednesday, we tried a La Vista Park, Children's Park. I would say this was a below average playground, with older equipment. Again, it is a playground, so the kids had fun. On the way home, we visited a playground in Papillion, one we had been to before,  the Glenwood Hills Playground. We were not there 5 minutes when Addison came running to me, crying, screaming that she was stung on the rock wall. After calming her, I went over to the rock wall, and Addi pointed to the yellow rock on the top of the wall. So, I climbed the wall to check things out. Looked empty. Then, I knocked on it. Sure enough, I big wasp came flying out! So, I guess Addi is not allergic to wasp stings as her little finger just got a little red and a little puffy, but she was fine. And, we probably will not be going to that park again, at least for a while, as it will be forever remembered as the park with the wasp.

Once back at home, we decided to celebrate the first day of summer by making sugar cookies cut out to look like flowers. Okay really, I need to get summer cookie cutters, but the flowers had to do for now. Addi and Asher mixed up the dough, so they may not taste that great (I helped though, still not saying much). Alivia someone talked me into hosting yet another sleepover. I swear, I must be one of a handful of parents insane enough to have sleepovers. My kids are rarely invited over for sleepovers, but kids always seem to end up sleeping here. I guess I would prefer them under my roof anyway. More on sleepovers on another blog post.

Meanwhile, Chris and Asher got ready and took off to their first ever College World Series Baseball game. Asher was quite excited; Addison was quite mad. Alivia got a sleepover, Asher was going to a baseball game, and she was left with ZERO. She was NOT HAPPY!

After the boys left, the girls (now 3 sweet little girls - ha!), took off to Costco. I needed a couple things, the kids could get frozen yogurt, and I wanted to see if they had this GIGANTIC bear that Addi wants for her birthday left (Grandma Bet wanted to give it to her). Too bad the girls left their sweetness at home. The bear, they had, the sweet girls, must have stayed at home. I sat at a table while Alivia's friend tooted so loud it put my Dad to shame (and that is saying something!), followed by, "Woooh, that one just flew out of my butt!" If you could have seen the glares from the people around us. I was mortified! Oh, if that was not enough, she belched super loud, causing me to decide it would be better to finish their treats in the car. What happened to sugar and spice and everything nice?

As you can see, being a stay at home mom takes quite a bit of creativity, energy, and patience. I am still working on some other skills to perfect my resume. :) 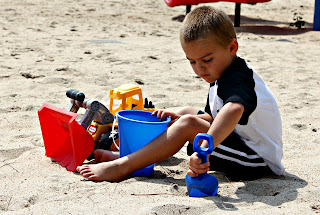 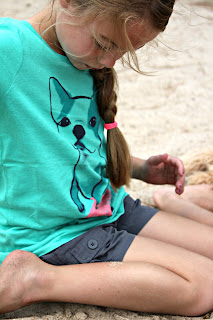 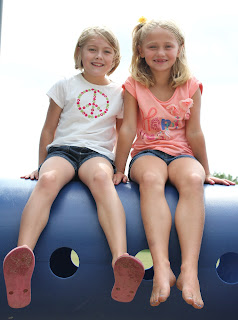 Man, you are a nicer Mommy than me, keeping your kids busy! Sounds like fun to have so many playground choices. Even though you have less choices in your area, you still have more closer than we do here, which is why we hang out in Omaha so much. So fun!