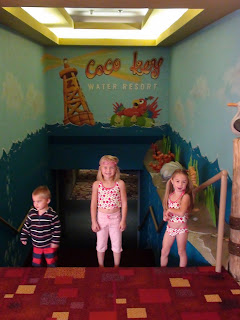 The Austin Family finally took over overnight stay at the Coco Key Water Resort in Omaha on Thursday night (Alivia has Friday and Monday off of school) to Friday. We arrived at opening at 4PM. It was a smaller scale water park when compared to The Great Wolf Lodge, but it was still nice. The park has a fun little area for the little kids with 2 water slides and zero entry. Addison and Asher loved this area, and Alivia liked going down the slides for a while. Then we moved onto the Parrot’s Perch, A many level play island with 4 smaller water slides, water cannons and a huge dumping bucket. Alivia refused to go down any of the water slides until Saturday morning, then she loved them. She just had to get over her fear. The kids also enjoyed the lazy river, and we floated around and around in this! They were so disappointed that it was closed Saturday morning for a bit, but it opened in time for us to enjoy it for at least another 1/2 hour. Nice to just chill on the river. All the kids got into the lily pad jump (Addi and Asher crawled across them) and the basketball hoop pool. Chris and I had to try out the bigger waterslides. There are 2 that one can go down on tubes, one dark and one light, and then one without a tube that is dark. I did not like the dark ones, but the light one with the tube was a lot of fun. I tried to encourage Alivia to go with me, but she refused. That's okay, Chris and I still got our money's worth (since it was free!).

There is food available pool side, restrooms with showers, and towels. We used their towels both days, but they are smaller and do not soak up much water. One goes through a lot of them quickly. The towels on Friday were better, but I may bring our own next time. We brought snacks, too, and I did not see that snacks were not allowed. People were eating right along the pool.

After swimming on Thursday, we ate dinner (that I had packed) before playing at the arcade. Alivia won a ball almost immediately, which made Addi and Asher sad. Alivia tends to be lucky.

The rooms, well, they just are not nice. Our room smelled like an ashtray and just got worse as we stayed. We opened the window which made the room cold. When we turned on the heat, it smelled like a heated ashtray, which is just disgusting. There were holes in the bathroom walls, the wall paper was falling off, and the bathtub was filthy. I'm just saying, if it was not free (Alivia won this remember at Kids Explore!), I would have been complaining to a manager.

Our biggest complaint about Coco Keys is that the air may be 84 degrees but the water is tepid at best. It is not bath water temperature, so Asher's teeth were chattering almost immediately. We had to get out both days because of Asher being so cold. He was miserable! It was so sad! They need to improve on the water temperature for the price one pays to go there. The girls tolerated it to a point, but they still were cold, with purple lips and fingers. Additionally, the room price ($175) is way to high considering the hole of a room you get. It is far from the kid friendly room and hotel of The Great Wolf Lodge...not even close. It would be closest to an old, yucky hotel at best. And, the water park opened at 4PM! on Thursday afternoon and not until 11AM! on Friday. That is crazy! I believe the Great Wolf opened at 9. It is a water park resort...so it should be opened no later than 9am. Just saying...

Positives we saw: Many life guards all over, Al (I believe that was his name. He was an African American man that I saw in the arcade and in the pool area) is awesome! I don't know what is job title is, but he ended our trip on a great note after he gave the kids handfuls of candy in the arcade after we had to wait (and were just going to leave) to turn in our tickets to get a mere 2 tootsie rolls. He was very enthusiastic and helpful whenever I saw him. Additionally, the water park offers something for everyone for a day of fun.

We may return someday. It is closer than The Great Wolf Lodge and offers many of the same things. However, we will wait until Asher is 5, Addi is 7 and Alivia is 9 so they can all enjoy the fun there and perhaps tolerate the cold better. And, we will not stay in the rooms unless they are much improved!

Going to Coco Key, here's what to bring:
1. Money: It is pricey. Need money to get in, eat and to play at the arcade.
2. Towels/swimsuits (an obvious one)
3. Snacks for between meals
4. & Have fun!

Family Favorites:
Alivia: Bigger slides
Addison: She did good for Addison. She liked jumping on the lily pads and going down the slides in the perch. She was a good sport!
Asher: He liked the slides and just splashing in the water.
Chris and I: We liked the BIG water slides and that the kids had fun. Best of all...it was free! 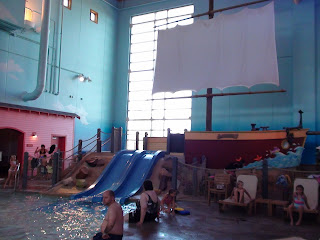 Whenever we go to CoCo Key we end up having more fun at the OLD pool, which is still there and available for those who have a room. It is a HUGE zero entry pool with big columns and little geisers. There are rarely any kids there (b/c people don't know it is there still!!) AND there is an indoor kids playground right by the pool plus LOTS of tables and lounge chairs. We usually get pizza, eat by the pool, and play in that area. We do also go to the water park but usually end up at the old pool, it's not as cold either.