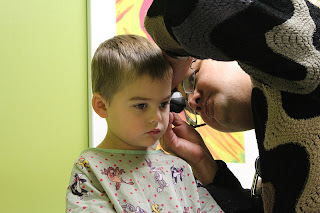 Friday was a big day for Asher. He had his 4 year check up. Now, in our family, this is a big deal. Not only do you get to go to the doctor (note: "get" to go), but you get to have your Pre K vaccines and go out for a donut afterwards.

You see, I do not like the hour long Kindergarten appointments. I find them to be some form of torture on a child who has no idea what they are in for come fall. They are going through enough without having to endure the vision and hearing tests, the pricking of their little finger, going potty in a cup (although I am not sure they are still doing this), and THEN getting a bunch of vaccines, aka SHOTS. Come on!!

So, at four, the normally dull appointment, we throw in the vaccines. The kids do not like it at four years old, but they are easier to manage during those shots than they would be at 5 years old. And, even the pediatrician we go to thinks I am so smart in during them at 4 (thank you very much!).

At any rate, Friday was Asher's day. We arrived just in time for his appointment. He was very timid, but answered all of the kind Doctor's questions, hopped on one foot, and the whole nine yards.

Asher was found to be 39 inches tall (22 %) and 33 lb (23%). He took his shots like a man, I mean boy, telling the nurse, "You are mean," as she left the room. We then left to get the donut. Asher ate it in the car since our pediatrician is so far away right now. We had a quick errand to run before going home. When we were standing in line at Hobby Lobby, Asher sat on the floor and looked green. After checking out, I took Asher to the bathroom where he did not go. Hummm...why is he green?

Unfortunately I found out in the car why he was green as he got sick all over the car and himself. It was a long ride home, with the window open.

He never had a fever, but remained sick with nausea/vomiting the rest of the day. Poor boy.

Other than that, he did get a clean bill of health. Asher counts like a pro, knows his colors, and is working on the basic Kindergarten skills. He hates to get out the colors and avoids the at all costs. So, I must start working with him more on this. He uses a scissors well, rides his bike with training wheels, and can be social with his peers. So, he is on his way. And besides, he has another year and a half and a year of preschool before entering Kindergarten.

But, let's not talk about that. 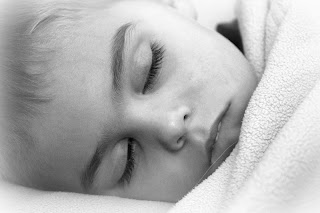