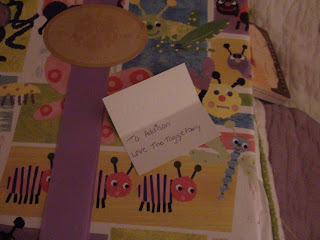 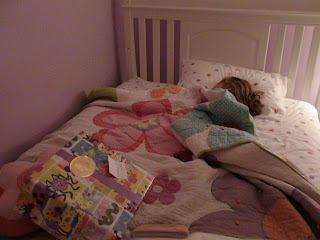 Addison, now 4 years old, has had an never ending love for her thumb and her taggie blanket. She did not suck her thumb without the taggie blanket. We took away the blanket, or exchanged it, for a big puppy before we moved. She was without the blankets for months...until we moved. Then we caught her sucking on tags from her pants, shorts and even her panties tags and sucking her thumb. The poor thing needed something to help her transition into a new home.

So, Daddy and I gave ALL of her taggies back to her. Addison was in heaven. She took the taggies EVERYWHERE. She grew to like the pink one from Grandma Bet best, and Grandma Bet had to replace her favorite ribbons from the blanket many times.

It got to the point where Addison was sucking her thumb all day long. I could not get her to keep it in her room. She got it dirty, and then was getting sick almost weekly. The time had just come...Addison had to say good bye. But how?

This is where the Taggie Fairy came into play. I am not sure how I heard about this idea, but I did. She goes to bed as normal after being prepared for weeks that the fairy would be coming soon. On Tuesday night...the taggie was taken by the "fairy" and put in a special place and replaced with a nice present from Von Maur, of course. The idea is that Addi would find the present in the morning from the taggie fairy. Of course, all good ideas have flaws. Addison, who rarely wakes up, woke up at 12:30AM to find the present from the fairy. I actually think Alivia may have seen it from her room and woke up Addison...but the girls are not telling. Anyway, Addison opened the present and her and Alivia began playing with her new, soft, webkins puppy at 12:30 AM! I told them to go back to bed, and then I returned to bed. However, the girls got back up and played. At 4:00AM Addison woke up vomiting in Alivia's room. Why was she in there? Because she was sleeping under Alivia's bed of course! Who knows how long they stayed up!! And why she was getting sick is a whole other story (she was fine by breakfast).

When 7:15 rolled around the next morning, Addison came into my room excited to show me her new toy from the Taggie Fairy. Addi and Alivia decided that the Taggie Fairy got into our home by magic, took her taggie, and somehow made it into a dog. However it happened, Addison is content. She has not asked me for her taggie once. We commented to her on how the Fairy must have thought Addison was ready, how she is a big girl now, etc.

Addison has changed since the Fairy's visit. She is more talkative now that her thumb is not in her mouth. She also comes to me more where in the past she would run to her taggie and suck her thumb. I am babying her a bit for the moment as she transitions to being a big girl.