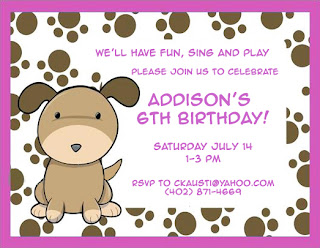 Yesterday Addison celebrated turning 6 with 3 of her closest friends along with Alivia and Asher. Yes, it was a small party. But, Addison likes to keep things intimate I guess.

The party started at 1pm. We started in the dining room where the kids did a build a dog activity. I wanted something much like the Build a Bear parties, but with dogs (since Addison is so in love with everything dog). I found the perfect little dogs to make from the Pink Moose Filling Station. Each kiddo made their own puppy, stuffing it, kissing the wishing star and placing it inside, and then zipping it shut. It was super cute and fun! Each dog came with 2 stars, so the girls wrote their name on one of the stars and gave it to Addison to put inside her Puppy so she will know everyone who was at her party. The dogs each came with their own birth certificates, making it even more fun. Each girl named their puppy, and I placed the name on the dog's tag, too, so the kids knew which one was theirs. I would definitely recommend building an animal at a party. It took 20-25 minutes to the kids to do, with help from Chris and I (definitely need an extra hand, too). 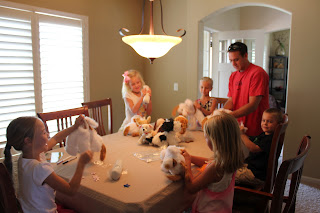 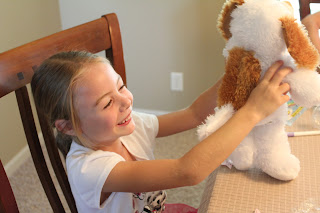 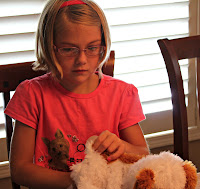 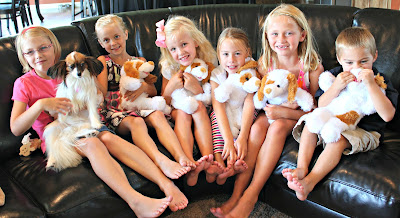 Next we moved outside for a bone hunt. I had 2 bones per child with their name. They ran around looking for them. It was so hot, I probably should have done this inside. The winner got a bag of bones (Scooby snack graham bones). They all had Scooby snacks in their goody bags and to eat during the party anyway.

Next up...the Puppy Pinata. I had filled it with candy Addison liked such as Starbursts, Milky Way, Kit Kat, Peanut Butter M&Ms, etc. Needless to say, this candy could not be outside long since it was probably 95 or hotter outside. Chris hung up the Pinata by our dog tie out cable from the swing set. Chris spun the the girls in a circle, quickly getting out of the way, before allowing them one swing. By the time the girls had their second try, the puppy had lost its head. Chris hooked up the headless puppy and let the girls swing again. This time it broke open...and Chris dumped the candy around. Yummy! 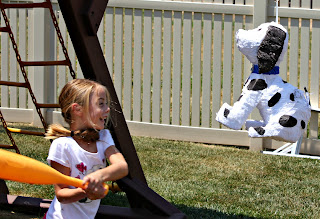 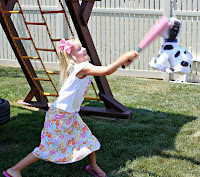 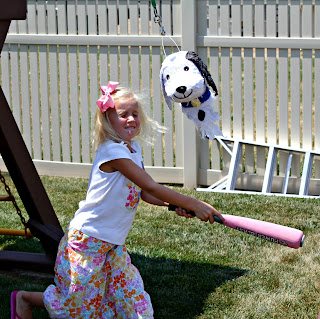 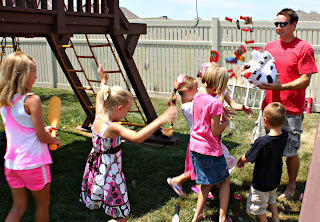 Once inside, they had a couple pieces of candy and juice, then Addison opened presents. She got a neat little zhu zhu puppies vet playset and puppies that was super cute. From another friend she got a ring, and from her other friend she got a Initial A purse from Justice filled with cute little girl stuff (Addison loves purses too!). Alivia gave her a stuffed puppy (big surprise) and Asher gave her a Magic 8 ball that was a big hit. 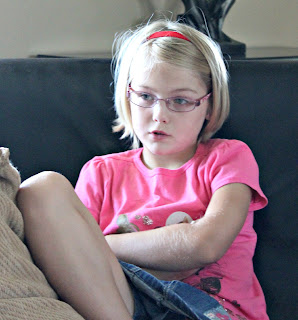 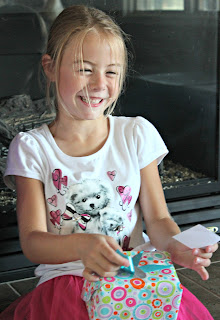 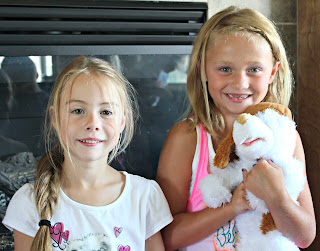 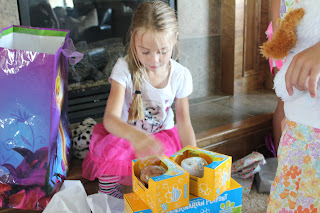 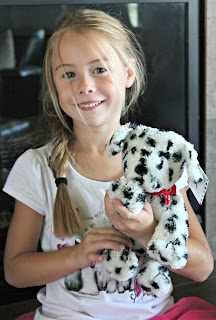 Addison was now ready for cupcakes! We served puppy cupcakes, puppy chow (also known as Muddy Buddies), Scooby Snack bones and juice in a puppy cup they all got to keep. As I find typical at kids birthday parties, the kids did not eat much. I come to expect that now. 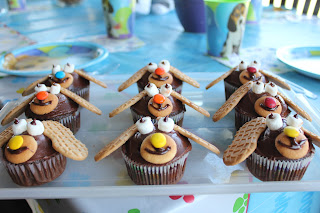 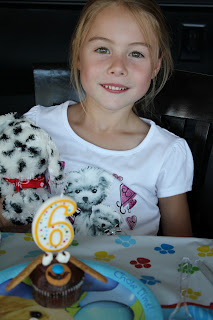 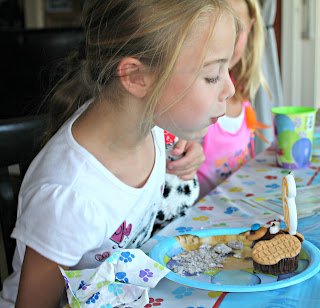 The goody bags (not pictured) contained a bag of puppy chow, a little puppy, Scooby snacks, puppy bubbles, puppy stickers, and a bone straw. The girls also brought home candy from the pinata, a cupcake for their sibling(s), and the dog they had made.

It was a fun party! This is Addison's second puppy party, so I had to get more creative this year. Next year I will try really hard to convince her to do something else! I believe everyone had fun, and that is what is important.


Having a dog party?
I purchased my supplies from Birthday in a box. I loved that I could order, see how much I was spending, and it arrived in a box without ever having to leave my house. I opened the box, decorated and was done. So nice! The goody bag items were in the box, too, for the most part. The Build a dog idea was fun and an easy party idea. Alivia wants to do a cat next year (we will see about that). So, I may be doing it again.

Again, Happy 6th Birthday, Addison. We sure are off to a fun start!

What an awesome party! I have bookmarked some of these ideas in case Ana wants a party like this! How creative and neat! Love it! I bet she had a wonderful time. :)