The first one was pulled by her friend Kaitlyn during school. It bothered Kaitlyn that Addison's tooth was "hanging by a thread." How funny is that! That night, the tooth fairy must have thought it was too windy because she did not make it (ooops!). The second night, the Tooth Fairy remembered and brought Addison a chapter book that she asked her to bring and $5.

The second tooth was hanging by a thread after lunch yesterday. Addison reluctantly allowed me to pull it. Really, I barely touched it and it came out. She was beyond thrilled. Addison asked the tooth fairy for fairy dust this time (FYI: I found the fairy dust at Hobby Lobby and put it in a tiny corked bottle. The corked bottles come in a package of 9 or something. The fairy dusk is actually called fairy dust but appears to be very fine glitter. It comes in many different colors. Addison got purple, of course.). She received money plus the fairy dust this morning.

Here is Addison's new look. :) She's pretty excited! She had face time with her friend Kaitlyn to show off her new look! 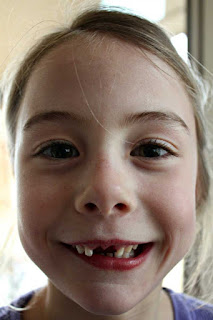