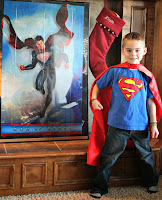 Happy 6th Birthday Asher Wade! Asher turned the big 6 years old on November 29, yes, Black Friday. He was so excited and sweet when he woke up raring to go. He opened up a little present of 2 shirts (one that says, "I go fast!" and a soccer shirt). He loved both of them.
The Superman Party was scheduled for 1-3. His 7 friends arrived right on time, 5 boys and 2 sweet little girls. Gotta love Asher. He is all boy and a total flirt!
The Superman party started off good and fun with Superman coloring, Superman tattoos and all the kiddos getting Superman Capes and running around in a Superman obstacle coarse. Asher's friend, Nick, did not likes Superman. So, Chris put in the movie just to show him a cool part so the little boy would see how cool Superman was. While the boys were watching a small snipit of the movie, one little boy swore, using the Lord's name in vein within the swear word. Okay, what?! He is 6! Then a little 5 year old repeated it and thought it was funny! Chris was not happy. He sped up the party then and there, shifting things to presents and cake, then outside to play and exert all that boy energy.
It went well after that. But, Chris and I learned why these boys spend their days in the safe seat at school. We also learned that if the parents do not physically bring the kid to the door, instead dumping them off in the driveway, the kiddo probably will not be the best behaved. Just saying. :)
Asher had a great time, and really, that is what we were seeking.
After the friend party, Asher had time to play with his new toys, get cleaned up for party number 2. Grandma Kathy and Grandpa Bob gave Asher his gifts on Thanksgiving (art supplies and roller blades), so it was just Grandma Bet and Grandpa Bill at the Mamas Pizza party on Asher's Birthday night. We were able to try out the new Mama's Pizza in La Vista. It was quite good. After an afternoon of cupcakes after a day off Turkey, even Asher could not eat much.
Asher then opened the remote control car from us and the green machine from Grandma Bet and Grandpa Bill. His gifts were very cool. He was excited.
Asher had a fun day and went right to sleep. That NEVER happens.

Asher's Favorites at 6 years old
Color: Black
Toy: Coloring box from Grandma Kathy (Asher loves to color and draw and does so every night before he finally falls to sleep).
Fruit: Strawberries
TV Show: The Middle
Lunch: Subway Turkey/salami with pickles, mustard, lettuce and onion.
outfit: Go fast shirt (that he just opened when I asked him these questions) and jeans.
Game: Connect 4
snack: Scooby snacks
Animal: Cheetah
Book: Little books from school
Best Friend: Cameron
Cereal: Chocolate Special K sans milk
Favorite thing to do outside: Ride my bike without training wheels.
Drink: Water
Holiday: Christmas
What do you like to take to bed with you at night? Little brown bear
Favorite thing to eat for breakfast? Waffle and bacon
Birthday Dinner? Mamas pepporoni pizza
What do you want to be when you grow up? A pilot.

Asher is a wild little boy who likes to play non stop, likes his ipod touch for quiet time watching netflix or likes to color alone in his room late into the night. Asher will not sleep unless his door and the door to our room is open and he can see us in there (so we can not go downstairs after he goes to bed). But, Asher stays up coloring and rarely gets to sleep before 9:30 even though he goes to bed at 8 PM. :) Asher loves his vegetables but will not eat bread, will drink milk out of a cup but refuses it in cereal and loves to give us hugs whenever possible.