In our Catholic Church, the First Reconciliation, aka confession, is to be done in a group with all the other kiddos going through their first reconciliation followed by their first communion in the spring. I would be okay with this, but there are probably 200 kiddos going through this, so the day/night of their first confession is overwhelming to me, let alone a kid. Chris and I knew when Alivia was going through it, she would never go up in front of other kids and state her sins. It is a private matter. So, we scheduled a private first reconciliation for Alivia when she was 7, and we did the same for Addison this go around (and we will do the same for Asher, hopefully). Our program leaders are not very easy to get a hold of (as I am sure they are overwhelmed with so many kids), and never returned my request to schedule a private one. I emailed Father Vogel who quickly go back to me and scheduled it for Tuesday, yesterday, right after school. He did Alivia's too!.

We arrived at 3:30 and Addison did not seem nervous at all. We had practiced at home and she had a practice card to get her through her first few confessions. She was in and out and was off to say her Hail Mary. Chris, Alivia and I also went through a confession. It was a special day for Addison.

As an extra special treat, we went to DQ for ice cream afterwards. :)

Congratulations Addison! Now onto preparing for First Communion in the spring! 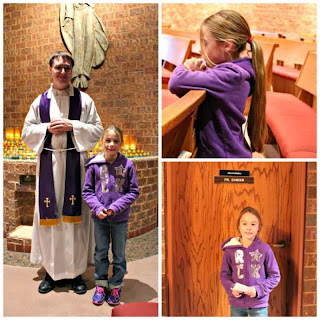 What a wonderful and special day for you all. I love that you scheduled a private one. I would do that too.