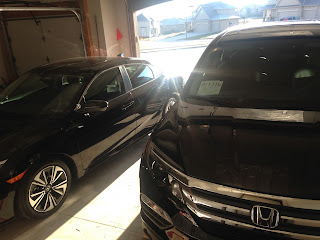 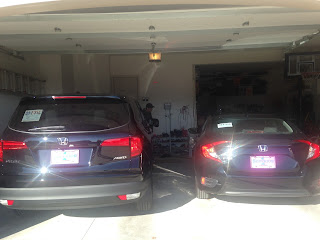 That's right, on December 18, Chris and I purchased 2 new cars. I've decided that buying cars is kinda like child birth. It is very painful, expensive but the end result is usually worth it. :)

As I have posted, I have been looking for the perfect non van family car for a while. I fell in love with the Buick Enclave for its roomy interior. What I did not like was that it was so much more expensive but lacked the technology that we found on much less cars in its class. I also loved the Acura MDX. LOVED that car. However, Alivia crawled into the back and said it was just too small. I knew she was right...but it was such a sweet car. It also preferred premium gas. We did not want to deal with that!

On the last day of November we went into Superior Honda to purchase. It was snowy and yucky out and the last day of the month. They did not want to sell us cars on that day. We should have taken our business elsewhere. But, we are dumb.

We ended up, what we thought, ordering new cars from them. The cars on the lot they said were traded. Not true actually. The civic was used to test drive the hell out of. It had 65 miles on it the end of November and when we went to pick it up it had 371 miles on it!! They did not tell us this until they had our money and the dealership was closed. They actually never did tell us...we read it on the last sheet we signed. How crocked it that?!?! With that kinda of miles we could have bought used. I was not happy and let them know ( the pilot had the appropriate 9 miles on it). They didn't care at all. They gave Chris a free oil change and sent us on our way.

One, I will NEVER GO BACK TO SUPERIOR HONDA EVER! I can not believe they can stay open doing business like this. I will be giving the free oil change away. Seriously. And, it will be a while before we buy new cars.

The cars are great. Well, until Chris came home with the pilot yesterday and cracked the windshield. $1000!!! and the windshield is on backorder for 45-90 days. Nice. I have not even driven it yet!! Now I get it all broken. Sweet. Thankfully insurance will pay for some when spring comes and the windshield becomes available.

So far, both cars work for what we purchased them for. The civic gets great gas mileage. Chris drives to work alone and rarely has kids in his car. If he does, it is to drive one kid to soccer. The civic is actually quite spacious and has a lot of backseat room and trunk room in this 2016 model. Chris had to get the turbo addition, which if anything, makes it a quicker car to steal. (Civics get stolen A LOT). We are hoping this car will be driven by our kids in a few short years and Chris will finally get a car he wants to drive (maybe a Jeep Wrangler, but we will see).

I can't say much about the Pilot because I have not driven it much. I do like the big console in the middle. It offers a lot of space for handbags, ipads, etc. It is kinda difficult for Asher to get into the back seat of the Pilot without help. But, with time, hopefully he will get the hang of it. Afterall, it is not a van.