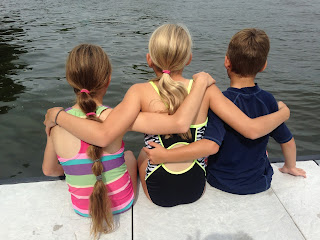 This year, we decided if we were going to the Lake...we were GOING TO THE LAKE!! So, may as well spend the entire month of July there, right?! Let's do it!!

The kids were excited yet a little apprehensive. They loaded up in the van and Grandma Bet and Grandpa Bill drove them to the lake while I worked one more night and slept, meeting them on July 3. The lake is just different. During the weekend it is mass chaos while during the week it is super peaceful. We love it at the lake.

Grandma and Grandpa spend the first 8 days with us. It was wonderful. We mostly stayed at the house and swam, but we also tubed and took boat rides and jet skiied. The kids believe next year they want to try skiing! This year was the first time EVER the lake was no wake for one day due to flooding. Okay, first time I have ever been there. It had been years since this has happened. There was debris all over the lake making it quite hazardous at times.

After they left, we had a few days to relax until Chris and Addison and Alivia's friends came down to join us for a weekend to help celebrate Addison's 9th birthday! It was SO MUCH FUN to celebrate her birthday at the Lake. We may have to do that again (and again and again!). They swam, went shopping, went to the candy store of course, took jet ski rides and more. Her friends had fun, too, we believe anyway. Saying good bye was awful. We were all fine until we had to hug them goodbye. Then, Addison started in saying she wanted to go home. 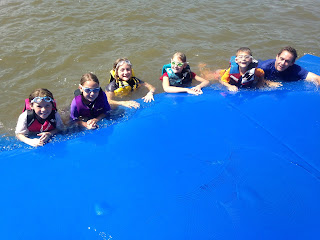 We spent that week going to the beach, shopping for school at the outlets, swimming and jet skiing. Really...just relaxing. It was really nice.

Our next friends were not to come for 2 more weeks. I was pretty sure Addison would not make it two more weeks, so I begged them to come early. That next weekend, my friend Jen and her son (and Asher's friend Michael) and Alexis came for a long weekend. We did more of the same, playing, swimming, candy store, and more. We all had fun. Alexis, who is 13, helped Alivia and Asher brave up to diving off the dock. They wanted to make sure they did not have to take any more swimming lessons. They were pretty good swimmers by the time we left this year.

We finished up the weekend and headed home shortly there after.

We have a wonderful time at the Lake of the Ozarks every year. I'm already looking forward to returning next year!
Posted by The Austin Life at 8/01/2015 03:50:00 PM